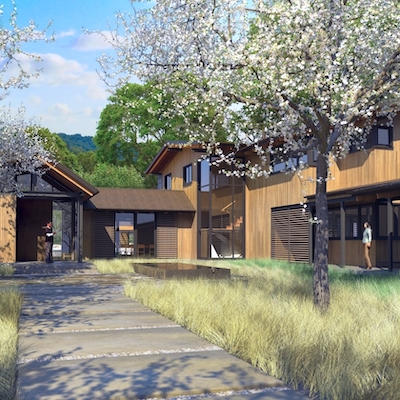 HISTORY: Practice was established in 1989 by Brooks Walker and Greg Warner. Made the jump into BIM in 2009 when the firm was just over 30 people. Have had slow and steady growth, currently at 70 total (58 architects). Everyone is in the BIM model, even senior managers who aren’t power users. Current firm principals are Walker, Warner, Mike McCabe and Kathy Scott.

THE BIM TRANSITION: Purchased Archicad licenses, trained staff, picked a start date, and new projects began in BIM with no looking back. “It was a big change but one that we had the good perspective to think of as a long-term commitment.” He credited a realistic timeline for adoption and strong firm leadership providing support from the top as key.

The pre-design stage still features fat pencils on trace as concepts and parameters are explored, but Walker Warner gets into the Archicad model early. Tom said the firm initially played around with an intermediate step of schematic and design development phases in SketchUp, but it seemed really inefficient to throw it all away and start over with BIM for construction documents. Now the design staff starts putting information into the BIM model at the schematic phase, taking care the work does not outpace design decisions. “Our approach is really tailored to how we work, and we tend to focus in as quickly as we can on one design and iterate on that.”

GOALS FOR BIM: Early in the decision process there were concerns BIM would conflict with the firms highly detailed design style emphasizing materiality and collaboration. Greatest appeal was the efficiency, most valuable side effect was better coordination. With a parametric BIM system linking all documents, changes in one part of the design automatically populated across plans, sections and elevations. “It took a lot of missed tracking of changes out of the equation,” said Tom. He doesn’t miss the duplicate work required when updating 2D CAD work. 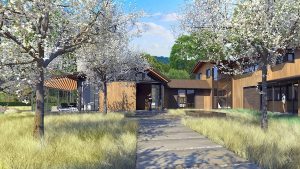 Another goal was better visualization for themselves, clients, consultants and contractors. Walker Warner uses built-in BIMx for Archicad and Twinmotion for effective real-time rendered models starting as early as schematic design. They then use screen shots from the rendered model or create walk-throughs. Tom said they’re starting to get into virtual reality as “an extension of the Twinmotion models, either a full VR experience or a panoramic view of the model.”

BIM CHALLENGES: While a collaborative team effort continues to be key to Walker Warner’s design process, not all members of the team are at the same place with BIM adoption. “Some are still using AutoCAD and exchanging CAD files, some use their own BIM model,” said Tom. While they are not quite to the point of using a single model for project delivery, that goal is approaching. The BIM model is also available to the contractors along with traditional drawings. “Each team is a little bit different,” said Tom. “Some still bring drawings to the site and mark them up, some load the model on their iPad.” The approach is tailored to the sophistication of the consultant, client or contractor. “We’re happy to push the technology as far as it makes sense.”

BIM IN THE YEAR OF SOCIAL ISOLATION: Tom said transitioning staff to accommodate the sudden shift to stay at home orders went smoothly for remote work. Teams were already working in the Archicad BIM model on the BIMcloud server and could easily continue collaborating from outside the office. Supporting software had also migrated to the cloud in the last half dozen years, and Walker Warner’s digital design coordinator already worked remotely from Oregon. Tom cited an existing culture of consistent BIM protocols and best practices as key to the shift. After adding bandwidth at the office and setting up home to office VPNs, the biggest change was more deliberate communication. Scheduled staff meetings increased to compensate for the loss of casual team communication by physical proximity. Walker Warner plans to continue with primarily remote work until the end of the year.

BEST BIM ADVICE: Tom’s 20 year career at Walker Warner has spanned the arc from Maylines to CAD to full immersion BIM. He said couldn’t stress enough how much making the change has helped the firm succeed. “Can phase it over years, but if you’re going to do it, plan to go all the way. I would never go back!”